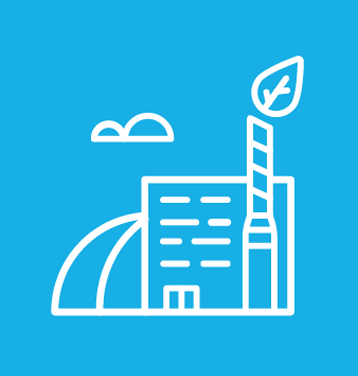 We are committed to delivering quality throughout our cycle of service. As a professional project company, we specialize in solid preparation and strive to anticipate our customers’ critical requirements.

Our system of delivery is built on years of operational experience and extensive knowledge. From process design and engineering to testing, installation, training and service — we’ve created a consistent feedback loop that ties our solutions together. 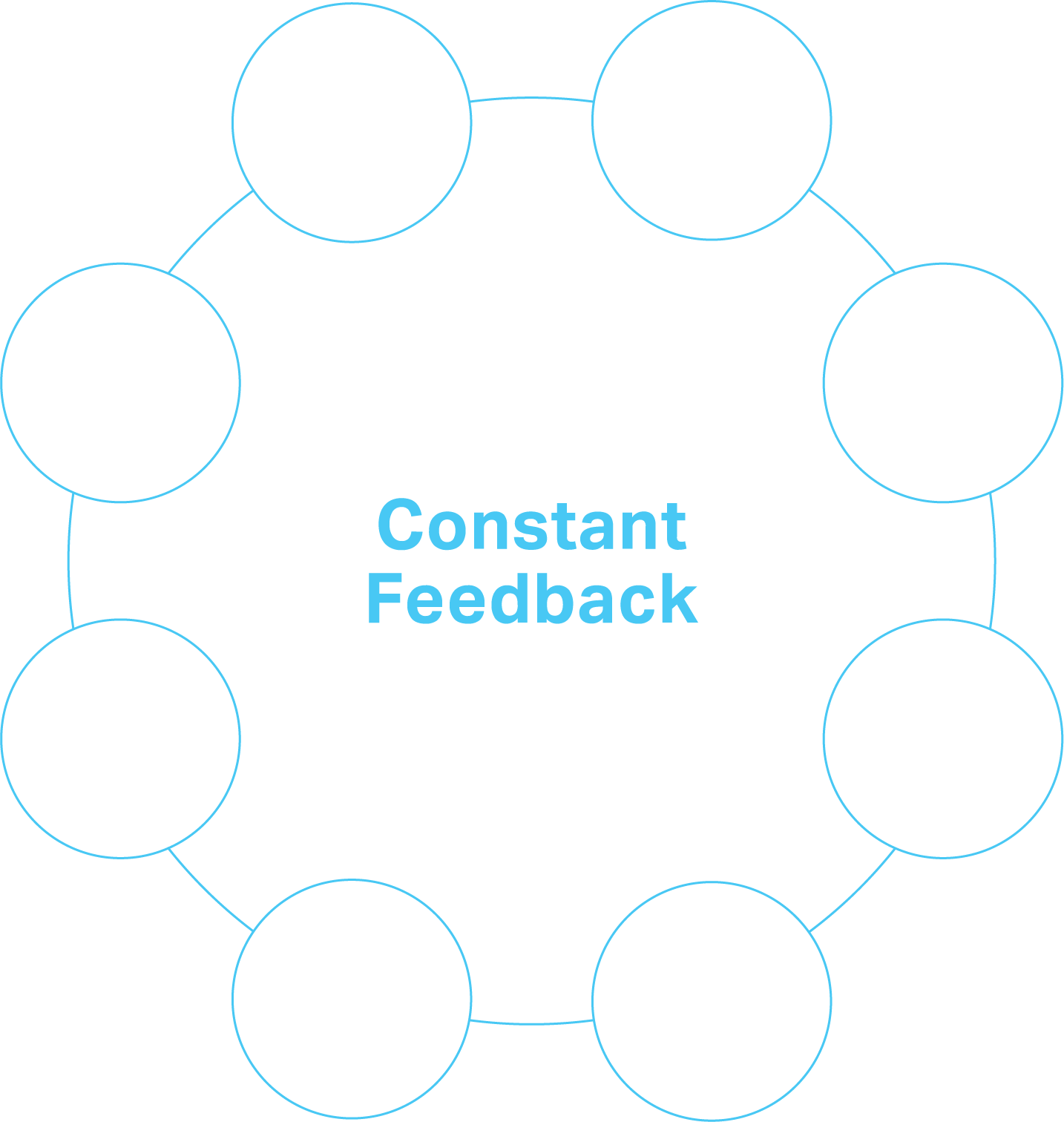 During detailed engineering, the design of the facility is completed in a 3D-drawing. Based on this 3D-model our engineers will create 2D-drawings which will be used for the fabrication and assembling. Our standard modular skids will be used where possible to make efficient delivery possible.

The use of standard modular skids reduces installation time and the margin of error.

We have the expertise to provide our customers with an array of waste treatment technology solutions to deliver the most optimal results, based on their unique needs. We’ve spent years strengthening our technologies so that they are as efficient and customizable as possible. All of our installations include one, or a combination of the following technologies:

We specialize in the design and construction of integrated and sustainable solutions. This system uses a combination of mechanical sorting and biological treatment like composting or anaerobic digestion. Mechanical treatment sets the stage for ideal aerobic and anaerobic biological processes. Once the materials have finished their time in-vessel, they travel to the final stage of handling –a screening system that ensures ideal product quality.

Anaerobic Digestion (AD) is an ideal circular solution. AD creates biogas from organic waste streams. Using a Combined Heat and Power unit (CHP) the biogas can be converted into renewable heat and power. Alternatively, by implementing and using a biogas upgrading system, the biogas can be turned into biomethane capable of fueling vehicles or injecting into the Natural Gas grid to render Renewable Natural Gas (RNG). We design and build AD systems based on our customers requirements, analyzing the waste streams to provide the optimal solution using wet AD, dry AD or a combination of both. Our dry AD batch system processes waste in-vessel without oxygen to produce biogas, while wet AD systems use digester tanks full of bacteria to break down the organic waste producing methane. Our experience in organic waste sector allows us the flexibility to create the ideal process to capture the most benefit from the feedstock.

Our engineers know how to meet the most stringent odour abatement criteria. We design each odour abatement system specifically to treat odourous compounds and ensure ideal dispersion to the atmosphere. Our facilities are designed to be air-tight and in a constant state of negative pressure. The aerobic systems within the design use the balance-of-plant air to process the organic steams, which allows for continuous air handling and superior process control. Based on local legislative requirements the system can be designed using chemical scrubbers, humidification, dust removal, heat exchangers, cooling towers, booster fans and bio-filters — all to ensure we are being a responsible neighbour. We also believe in building facilities close to generators to reduce the overall carbon footprint. 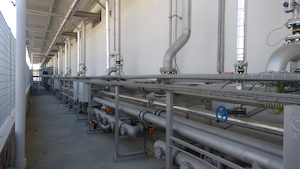 The Giugliano project was separated into two separate phases. During Phase 1 in 2016 we designed and built the Giugliano facility to process 36,000 t/a of source separated organics, including approximately 80% household organics and 20% leaf and yard waste. The facility uses 13 dryAD tunnels and/or 10 composting tunnels to convert organic waste into compost and biogas. The biogas that is generated at the facility is collected, stored, treated and then converted into electricity and heat using a combined heat and power unit (CHP). The electricity is primarily used to power on-site equipment, while the remainder is transferred to the public grid. The thermal energy generated is used in the dryAD and conditioning systems. The Giugliano facility was among the first built in Naples (Campania) region where up to 700,000 tons of organic waste is generated each year.

13 dryAD tunnels and 10 composting tunnels, including biogas treatment and storage.

In 2016, we were awarded the contract for the design and build of a second composting facility for Giugliano. The Giugliano Composting Facility treats approximately 65,000 t/a of organic waste, which includes a combination of food and leaf/yard waste. The incoming waste is first shredded and then spread across one of eight composting tunnels with a capacity of approximately 700m3 each. After the biological composting process — which takes approximately 14 days — the compost is removed from the tunnels and separated in a screening line to sort the material into three fractions:
1. Fine fraction (fresh compost ≤10mm), which undergoes maturation onto an aerated floor in one of the six maturation bays for a total of 28 days.
2. Intermediate fraction (material between 10-80 mm), which undergoes refining mainly to remove plastic films so that it can be recirculated in the biological process.
3. Oversize fraction (material >80mm) is removed from the process. 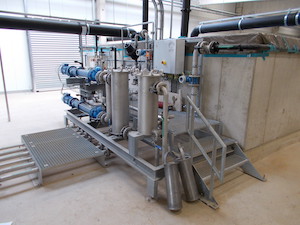 In 2018, together with Kompostwerke Rhein-Sieg GmbH & Co. KG (KRS) we built a state-of-the-art composting facility for municipal organic waste. We were responsible for the design and construction of all civil and process equipment works. The facility includes a large receiving area and logistical building with air curtains, ventilation systems, nine composting tunnels, a humidifier and three biofilters. All of this is connected using WTT communication equipment. The high-quality compost produced at this facility is screened on site and sold to local markets for agricultural applications. A three-year full maintenance contract is in place to guarantee operational excellence and customer satisfaction. 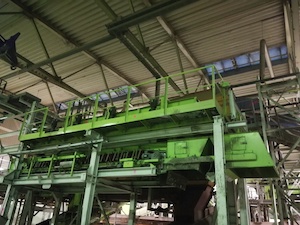 In 2019, we began updating the existing household and commercial waste treatment lines for KAVG. The plant, which was built in 2005 and had been modified several times, required significant upgrades to meet the new commercial waste regulations. We were responsible for disassembling the old machinery and installing new equipment. To reach the requested recycling rates, we installed new vibrating screens, a wind sifter, an NIR sorter, a FE- and NF-sorter and all required steel structure and conveyors. We also tried to use as much of the existing materials as possible, to reduce the amount of scrap metal. Finally, the existing SCADA was also updated.
The project was completed in a period of three-and-a-half months, which enabled the client to start production and increase the sorting capacity and purities.

Let’s build a sustainable future for our children together.
Learn more about our technologies & references.